The Closing Ceremony for the Third Palestinian NGO Project (PNGOIII) 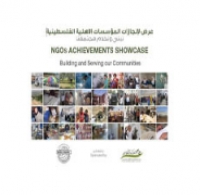 Palestinian NGOs have been delivering social services complementary to those provided by the Palestinian authority (PA) and in the marginalized areas where it is normally hard for public services to reach within this political situation and restriction of movement and access- especially that the Palestinian Authority cannot operate in East Jerusalem and Gaza. Thus, NGOs provide social services to those areas in particular.
The third PNGO project (PNGO III) in the West Bank and Gaza, and the Additional Finance (AF) in Gaza were designed to provide social services to those who are poor, vulnerable or affected by the deteriorating socioeconomic conditions by establishing an effective mechanism to improve the quality and sustainability o f NGO social service delivery.

PNGO III is a 10USD million project supported by the Bank during 2006 to 2011. The project grant recipient is the Welfare Association, who had delegated the implementation of the project to the NGO development Center (NDC).

Two key achievements include (i) the development of an NGO Code of Conduct, which is the first of its kind in the Region and is recognized as a model, and (ii) delivery of social services, complementary to the PA, in an efficient and effect way to Palestinians in the West Bank, E. Jerusalem and Gaza.

Furthermore, a mini showcase, using booths, was set up to enable participating NGO to exhibit and showcase their projects, discuss their experiences with PNGO with visiting guests and provide a platform for networking and fostering dialogue between the public , private and civil society.

Main objectives of the Closing Ceremony:

Attendees:   Special invitation were sent out to key people and organizations in addition to an open invitation to the general public that was publicized in the local newspapers and on selected radio stations.  Nearly 200 people attended the closing ceremony.