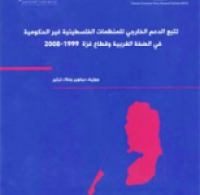 Between 1999 and 2008, external aid to the West Bank and Gaza Strip increased by over 600% to 3.25 billion US Dollars per year. During the same time period, external aid to Palestinian Nongovernmental Organizations (PNGOs) increased by over 500% from 48 million US Dollars in 1999 to 257 million in 2008. Throughout this period the level of external aid received by PNGOs fluctuated, however, it averaged around 10% over the 10 year period.

According to our findings, not only the amount, but also the type of external aid entering the WB&GS varied according to political conditions. During times of political upheaval, we identified shifts in the destination of external aid, usually moving away from development or the Palestinian Authority and towards emergency relief programs, as well as a shift in the conduits of external aid, away from bilateral donors and towards multilateral agencies. According to our findings, PNGOs are engaged in development activities on a nearly 2:1 basis to Relief, changing only slightly during the Intifada. Whereas we had expected a higher percentage of PNGO activities during the Second Intifada, we learned that much of the external aid to the Occupied Palestinian Territories during this period was channeled through International Nongovernmental Organizations (INGOs) and multilateral agencies engaged in direct implementation.

Amongst donor groupings, it is clear that Europe, both as an institution and as individual states, is by far the largest donor to both the Palestinian Authority and the PNGO sector, providing nearly 70% of the total funding to the latter. Aid from the Arab countries to Palestine has decreased steadily in comparison to Western donors and primarily contributes to the Palestinian Authority’s budget. Unlike European and American aid to Palestine and PNGOs, during times of Political crisis the amount and impact of Arab aid increases. Aid from the United States has decreased steadily throughout the period studied, from around 12% of the total external aid to PNGOs in 1999 to only 5% in 2008. According to our findings, nongovernmental donors surpass governmental sources in external aid to PNGOs, though most of the aid granted through INGOs comes from national governments. Prior to the Second Intifada, the opposite had been true, in which bilateral contributions to the PNGO sector outmatched those of the INGO sector.

According to our findings, external aid is critical to both the health of the PA and PNGO sectors. According to MAS’s estimates, external aid comprises over 60% of the GNI of the WB&GS. For PNGOs, the dependency is even more pronounced with around 78% of PNGO revenues come from external aid. The increase in aid dependence has occurred along side a decrease in PNGO funding from the local community in the West Bank and Gaza Strip.

The primary conclusion of our analysis of externally funded PNGO activities by sector was the seemingly clear correlation between political realities and the sectors receiving external aid. According to our findings in 2008, PNGOs engaged in Rights-based activities received the highest proportion of external aid (30%), followed by PNGOs engaged in the Social Services sector (26%), Economic Sector (22%), Education (14%) and Charity and Relief (9%).

According to our survey, external aid to PNGOs engaged in urban areas increased between 1999 and 2008 from 25% to just under 40%. We also found that PNGOs tend to focus their efforts in rural areas, spending 40% of their resources there, despite urban inhabitants making up only 31% of the Palestinian population. Due to the scale and importance of UNRWA in providing aid to Palestinian refugees, PNGOs are less represented in the refugee target area.

While PNGOs are regionally distributed somewhat close to the Palestinian population, those who partner with international agencies are overwhelmingly located in the Central West Bank, along with the vast majority of external donors. Though project implementation is more evenly spread throughout the WB&GS, it is still disproportionately targeting the Central West Bank in comparison to the number of people or PNGOs.