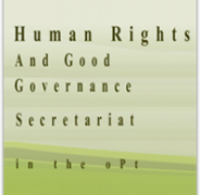 The Danish Government joined on Monday Dec. 6, the Human Rights and Good Governance Secretariat that the NGO Development Center (NDC) is managing, by signing a funding agreement with the NDC for USD 4.6 million. By signing this agreement, the total funding for the second phase of the Secretariat which continues until June 2013, reaches USD 16.2 million. Denmark is a founding member in the first phase of the Secretariat which was established in 2008, and joined today beside Switzerland, the Netherlands and Sweden.

The agreement was signed at the Danish Representative Office by Mr. Lars Adam Rehof, Representative of Denmark to the Palestinian Authority, and Mr. Ghassan Kasabreh, NDC Director. The signing ceremony was also attended by the members of the Secretariat, namely: Mr. Jack Twiss, Dutch Representative to the Palestinian Authority, Mr. Giancarlo De Becciotto, Head of Office of the Swiss Cooperation in the West Bank and Gaza and Mr. Peter Lundberg, Country Director of the Swedish International Development Agency.

Mr. Lars Adam Rehof, Denmark Representative to the PA, stressed during the ceremony on his country’s continuous support to human rights sector in the occupied Palestinian territories, and to the NDC. He also praised the important role the NDC is playing in managing the Human Rights and Good Governance Secretariat in the occupied Palestinian territories.

Mr. Ghassan Kasabreh, NDC Director, welcomed Denmark accession to the Secretariat. He thanked Denmark for its generous support in contributing to support the human rights and good governance sector in Palestine. Kasabreh emphasized that the NDC will continue to achieve its strategy to become a main mechanism to channel funds from donors to the Palestinian NGOs.

It is important to note that since the launch of the second phase of the Secretariat, NDC has signed numerous funding agreements with the organizations working the human rights and good governance sector in the occupied Palestinian territories. A week ago, NDC has signed new funding agreements, through the small grants funding mechanism, for half a million US dollars with 13 NGOs. The NDC has also signed in July 2010 core funding agreements for USD 7.7 million with 28 NGOs to support their strategic programs in the human rights and good governance sector.

NDC finalized at the end of 2009, the first phase of the this program which has started in 2008. NDC was selected by the Swiss Development Cooperation (SDC) (on behalf of Switzerland and 3 other donor countries, namely Denmark, Netherlands and Sweden) to establish and manage a Human Rights and Good Governance NGO Secretariat in the West Bank and Gaza Strip. USD 6.5 million were allocated and implemented during 18 months by 40 NGOs.