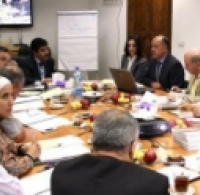 Saturday’s meeting was a crucial milestone in NDC’s year. Not only did the assembly approve the annual report and PricewaterhouseCoopers’ external audit report from 2011, the plan and budget for 2012 were also officially ratified and the external financial auditor selected for the period 2012-2013 (Ernst & Young).

Ghassan Kasabreh, is delighted that NDC’s governance process continues to evolve and provide a greater representation of Palestinian society: “The General Assembly meeting is an essential part of NDC’s governance structure. The contribution of so many experienced members of civil society, the private sector and academia is fundamental to the organizational wisdom of the NGO Development Center.”

As NDC continues to manage the Palestinian NGO IV Project (PNGO IV) and the Human Rights and Good Governance Secretariat, all layers of NDC’s governance structure will ensure the successful implementation of vital development initiatives. NDC is the largest Palestinian organization of its kind working hand-in-hand with Palestinian NGOs and community development organizations to improve the delivery of services to the poor and marginalized, and build a more capable  and responsive Palestinian NGO sector. In 2012, we look forward to continuing this relentless push towards an ever-more streamlined, integrated and accountable development process.