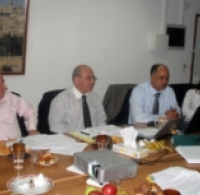 NDC held its annual General Assembly meeting on Saturday May 9, 2009 in its office in Al Ram and via the video conference with its members in Gaza. During the meeting, NDC General Assembly discussed and endorsed NDC Financial and Administrative 2008 annual report, action plan and budget for the year 2009, and the following committees’ reports: Fundraising and Finance and Audit reports, as well as, approving the selection of the auditor.

During the year 2009, NDC is planning to disburse an estimated amount of USD 12.5 million. The General Assembly also approved the selection of PricewaterhouseCoopers as NDC financial auditor for two years, starting 2008.

Prior to this meeting NDC held an unusual General Assembly meeting to endorse the new changes made to NDC structure as suggested by the Board of Directors.